Enoch Light and the Light Brigade 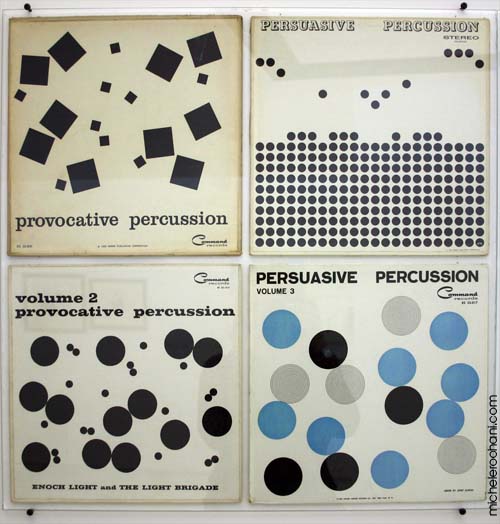 I cannot stress enough the importance of Enoch Light, possibly in my top 5 musicians of all time next to Bob Dylan, Django Rheinhardt, John Coltrane and The Beatles.

Here's an excerpt from Wikipedia if you are not familiar:
"Enoch Light (August 18, 1905 - July 31, 1978) was a classical violinist, bandleader, and recording engineer. He is credited with being one of the first musicians to go to extreme lengths to create high-quality recordings that took full advantage of the technical capabilities of home audio equipment of the late 1950s and early 1960s, particularly stereo effects that bounced the sounds between the right and left channels (often described as "ping-pong"). He arranged his musicians in ways to produce the kinds of recorded sounds he wished to achieve, the first to do so. The first of the albums produced on his record label, Command Records, Persuasive Percussion, became the first huge hit based solely on retail sales. His songs received little or no airplay on the radio, because AM radio, the standard of the day, was monaural. Light went on to release several albums in the Persuasive Percussion series, as well as a Command test record."

I recommend if you can find them Persuasive Percussion Volume 1-4 along with Provocative Percussion. However I have only been able to find things on the Command label at Garage Sales and in the used bin at 1 or 2 record stores. I started Mint 400 Records originally because I love what Command Records did with their label. Amazing artwork on every cover by Josef Albers, amazing gatefold artwork that explains the recording process and a genius like Enoch Light producing record after record with the Light Brigade.

Very few copies exist but I recommend if you can find any of the material done by Enoch Light in the 60's that you buy it immediately, if not for yourself, contact me and I'll barter or buy it from you.
Posted by N. at 12:49 PM